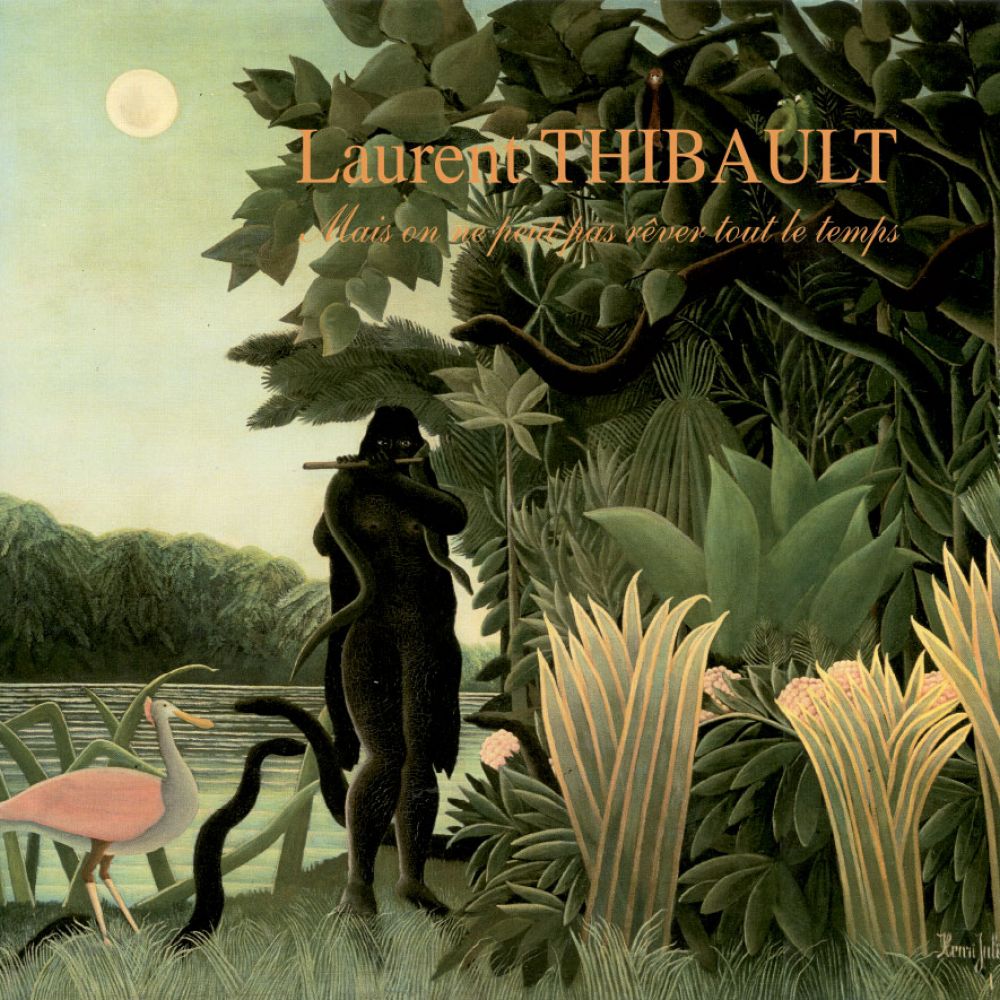 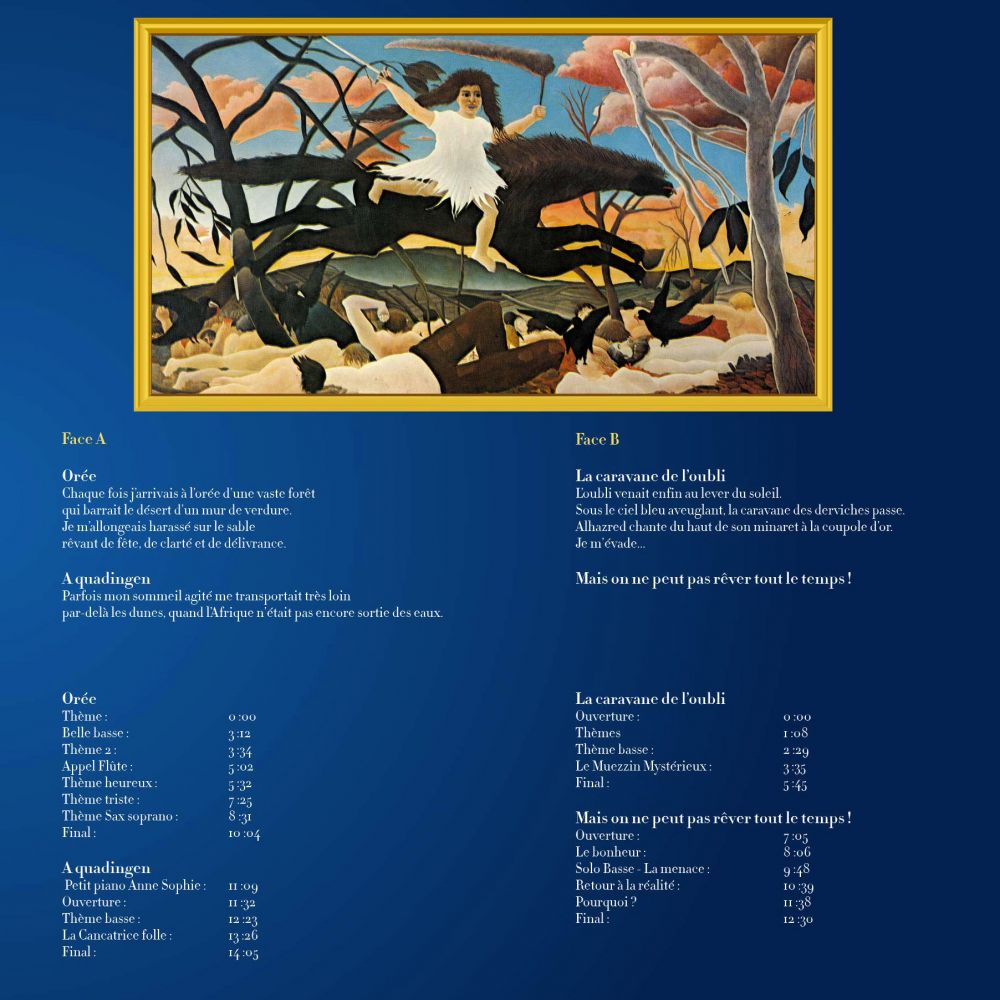 In the most unpredictable way, it was through jazz that I got the idea of “Mais on ne peut pas rêver tout le temps” (But we can not dream all the time) : I had discovered Pharoah Sanders, John Coltrane's spiritual son thanks to Christian (Vander ). We played Lower Egypt on stage before Magma existed, and the scat of his singer Leon Thomas was partly at the origin of the creation of the Kobaïen language !

Writing about Pharoah, a New Yorker journalist introduced the idea of “urbanization of art”. He compared these black musicians who played Africa without having ever left Big Apple at Douanier Rousseau, who painted jungles without having seen anything but the tropical greenhouses of the Jardin des Plantes in Paris.

As I always dreamed in front of the Charmeuse of snake, even if I had never gone to contemplate the original, then in the Museum of Jeu de Paume of the Tuileries, this article made me want to interpret some Douanier Rousseau’s paintings in music. And the best compliment I received was the comment of an English journalist who called me "musical painter"!

The record could not have been without Dominique Bouvier, drummer whom I had recorded several times with his fusion group. I know how to work for others, but to release an album under my name was not easy. But Dominique said, "You have to do it, you'll do it ! ". I did it !

I first recorded for each piece a guitar guide (that we kept most of the time), on which we built the drums parts, which were recorded alone, passage by passage, according to the explanations that I gave to Dominique on the imposed set-ups and what would be after. The songs and other instruments were later articulated. Small aside : for the recording of the Magma’s album Attahk, it was the opposite process ! Christian recorded his drums last, like a dessert that he reserved for himself, a great icing on the cake, allowing me to work his sound and his space according to everything else : to this day, who for us two it is Attahk which reproduces most faithfully the color so special of his game. Note : in these two extreme cases, the drums are wide and natural !

Francis (Moze) is my friend since school, when we were each 11/12 years old. We live today still close to each other. My mother, who had been a singer, did not want my sister or me to become artists. Missed ! When Francis, who was taking piano lessons also started playing guitar, I followed suit by learning the Beatles and Stones chords. At the end, we finished musicians while we had followed very different studies, just as my sister became a painter and graphic designer. It is she who created the famous Magma’s logo, and that of Thélème, its counterpart in peace and in fullness.

Francis remaining keyboard, I became bassist. It was much later, when it was decided between Christian and me that I leave the bass to deal only with the Magma’s production and management, as I could not cumulate both, that I ask in return that it is Francis who replaces me. I knew he could play everything !

It was inevitable that Francis appears on “Mais on ne peut pas rêver tout le temps”. His beautiful transparent Dan Armstrong shines and enchants throughout the album. He offered me the melodious bass line of Aquadingen's theme. It is also he who whips the parade of the Oppressed during the Return to Reality passage, interpreted by Serge Derrien's interwoven choruses : the latter were not simple to capture and mix, for the implementation as for the his ! On the other hand, if today it is easy thanks to computers, samplers, to recalibrate, or even to transform any sound source, it did not exist in 1978 ! It was necessary to record each sound without possible retiming, or to insert them from tapes in crazy manipulations !

Serge Derrien trained with Dan Ar Bras and Juan Nin Mor, group produced on Thélème. Serge has assured for the total album the many layers of choirs that overlap and intersect in complicated measures and harmonies, and played the flutes. Finally, it is his legendary laughter, joyful and communicative for all those who have the pleasure of hearing it that is so chilling and terrible when it is mixed with the crash of fire, explosions and cries of suffering...

Amanda Parsons, singer of Hatfield and the North from Caravan and Soft Machine, came from England thanks to Francis. The song of Orée imposed a sopranissimo singer legerissime. My wife Jacqueline, a classical musician, had noted for her the melody I had indicated. It was necessary to constantly correct this partition so that the timings that I wished were respected. I thank Amanda as well as Jacqueline for having complied with this arduous task, while the resulting song seems so natural ! Jacqueline has also played a Fender Rhodes on Orée, whose sound goes into a Leslie.

The warm and sensual voice of Lisa Deluxe Wood, singer of Magma (Attahk that I had produced and recorded two years earlier) is present on the four compositions. Some parts, like the continuous singing closed mouth on the passage "Why ?” have asked for a succession of catches, because unachievable without being able to keep her breath as long !

Lionel Ledissez, singer of Ergo Sum and Univeria Zekht (Thélème) is recognizable by his solo singing inspired by the Indians among whom he had lived in Mexico.

I recorded at the Castle the album "Distance between Dreams" by the American violinist David Rose, and he spontaneouly accepted to play on mine. David has since left us, but I still have great pleasure to find him listening to this record.

Richard Raux is since the first Magma a friend of long time. He plays on the Caravan of Oblivion an Indian reed flute.

Guy Renaudin, a Nantais friend of Serge Derrien, interpreted the last theme of Orée to the soprano sax, with a color close to that of an oboe.

The eight-year-old Anne-Sophie's toy piano, played as she climbs the grand staircase from the Castle to the studio, introduces Aquadingen. For the record, David (Bowie) played on the same toy piano the gimmick of China Girl (The Idiot of Iggy Pop).

At the end of the Caravan of the Oblivion, to suddenly go from Dream to War, I voluntarily scratched a face of a LP, Disco Inferno, taken from Saturday Night Fever, title not interpreted by the Bee Gees ! At that time, the CDs did not exist. I imagined the blow in the heart of my listeners when they would rush to their channel thinking that the reading arm had slipped !

Jean-Claude Delaplace was one of my partners at the Château, in charge of administration. Contesting my more "artistic" positions, he repeated at leisure this famous phrase : "But we can not dream all the time ! Which I mistakenly seized, and which became the title of the album.

The Mysterious Muezzin is yet another beautiful story, but that will remain mysterious... I was often asked why I had added to the end his song in the middle of the unleashing of mortars and bazookas, because nothing then justified it. I felt it like that at this time, for no reason other than musical or sound, but today this Arabic song takes an unforeseen news...

Apart from the guitars, I only ensured the non-fretless bass, especially on the Caravan and on “Mais on ne peut pas rêver tout le temps”, and some voices. Recording and mixing of course, and today remastering for this reissue. The melodic part of the Caravan was played on a saturated Danelectro bass on my Sunn amp, and the “à la manière de…” Sonny Sharrock solo on The Threat with my old Rickenbacker, the same one that I played for the Iggy’s The Idiot.

“Mais on ne peut pas rêver tout le temps” remained for a long time the only disc released under my name. The Enrêveur CD, linked to the eponymous novel is actually my second album.

I work on future personal recordings, all different according to my habit ! One will be an English album with English musicians and my lead guitar friend Henry Serafini, others will be sound instrumental creations... and a LP with Christian to illustrate the  novel Lizard I'm finishing !